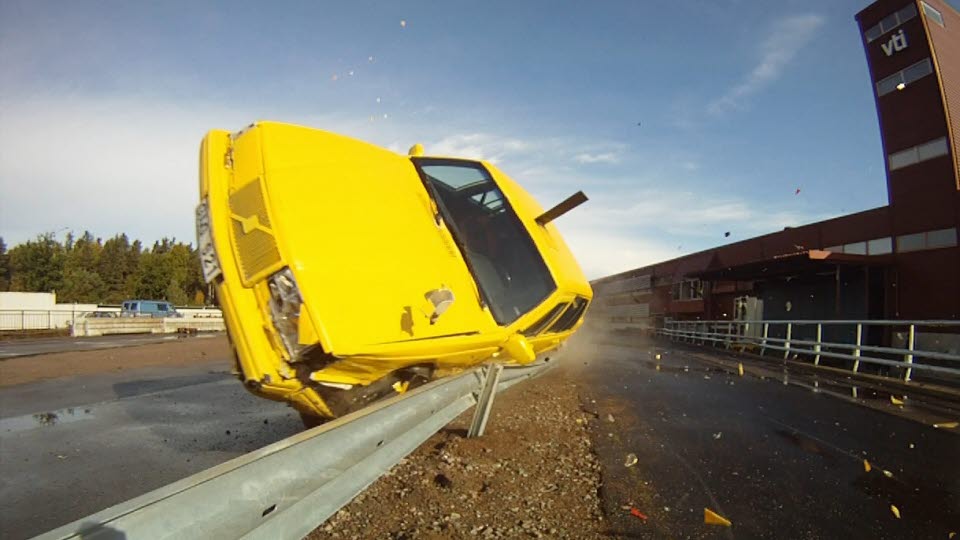 The VTI crash safety laboratory is the only accredited laboratory in Sweden to perform crash testing of barriers.

The VTI crash safety laboratory has been involved in crash testing of barriers already in the 1950s and in the 1970s. When the European EN1317 procedure was in its initial phase in the beginning of 1990s, VTI did take part of both the theoretical development of the procedure, and the running tests to gain experience. Until today, about 1100 barrier crash tests have been run, ensuring a broad and deep knowledge of the procedure.

EN1317 is a set of documents describing the various parts of a barrier and the functional requirements in case of an impact. The barrier itself, barrier ends, transitions between barriers, crash cushions and pedestrian parapets and motorcycle protection systems are all considered.

All barriers installed along the national Swedish road network must meet the requirements of the European testing method EN1317-2. Generally, EN1317-2 is a palette with ten different, gradually increasing levels of vehicle containment capacity depending on speed and weight. Crash testing verifies whether barriers fulfil stipulated criteria. A widely requested containment level in Sweden is a level named N2. In this level the barrier shall fulfil stipulated criteria in two crash tests, namely:

In crash tests, several parameters are to be determined, such as vehicle trajectory and barrier deformation, as well as vehicle accelerations. To objectively compare these accelerations, a theoretical injury risk value named Acceleration Severity Index, ASI, is calculated. A barrier that successfully has passed all the mandatory requirements will get a performance classification based on the assessed containment levels, the determined barrier deformation and the acceleration values, converted by ASI calculation to a risk assessment level A, B or C.

From 2010 onwards, Swedish authorities require that all barriers mounted along the Swedish road network are also CE marked. Approved testing in accordance with EN 1317 is one of the prerequisites for obtaining CE marking. In the case of CE marking of crash barriers, VTI cooperates with RISE (Rise Research Institutes of Sweden) and/or Nordcert, which performs Factory Production Control and also acts as Notified Body for CE marking.

NCHRPR350 and the updated version MASH is the American equivalent of EN 1317, and also a predecessor of EN1317. Road equipment in general and specifically barriers intended for the American market shall be tested and approved in accordance with this testing method. The VTI crash safety laboratory is one of few European facilities currently accepted by the Federal Highway Administration, FHWA, to conduct such tests in Europe for the American market.