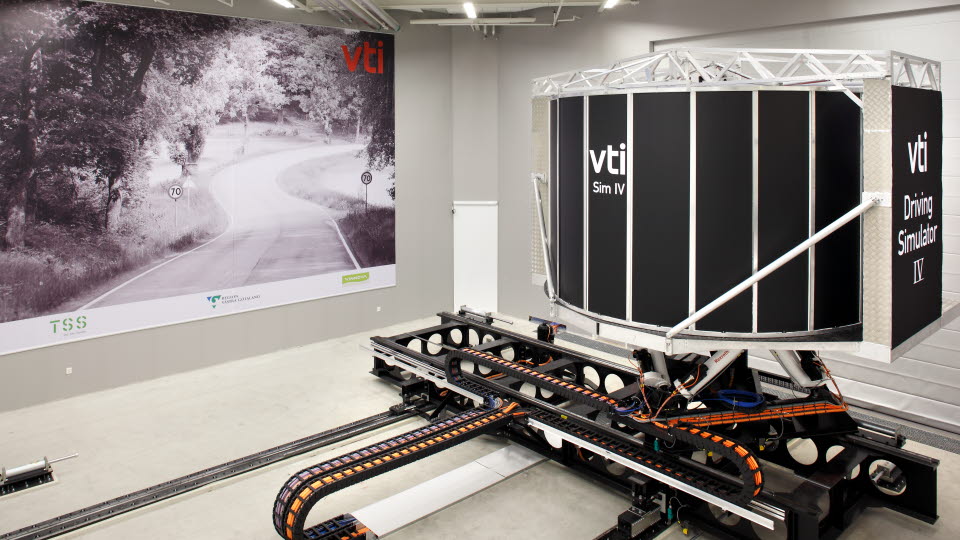 The same software is used throughout VTI's simulator environment, making it possible to move experiments between the different simulators. Experiments can also be moved easily to external facilities where the institute's software is used. VTI's software has been implemented and is used in driving simulators at universities and by vehicle manufacturers. 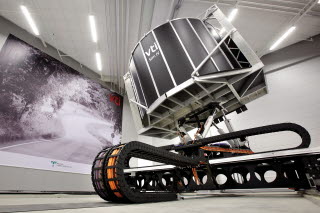 Sim IV has an advanced motion system and is the only one of VTI's simulators to permit significant linear movement along both x and y axes. It is the first choice when simultaneous longitudinal and lateral acceleration is important or if a wide field of vision is prioritised.

Cabs and passenger compartments can be exchanged quickly in Sim IV. The simulator has both a passenger car compartment and a truck cab. It has three LCD displays for rear-view mirrors and a visual system comprising nine projectors.

The visual system gives the driver a 210-degree forward field of vision. The simulator's imaging system has a camera-based calibration system, making it easy to switch between different driver positions. 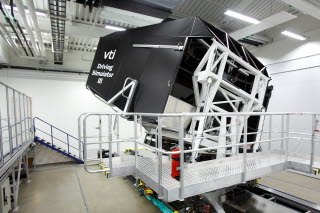 Sim III's linear motion system has world-leading performance. The system allows motion in four degrees of freedom and offers both linear and tilt motion. By linking the cradle's motion to the vehicle's lateral position, the simulator's motion algorithm creates realistic lateral motions. Sim III also has a platform that can be swivelled 90 degrees. This means that the motion system can be used for acceleration and braking instead of lateral forces.

The simulator's visual system consists of three DLP projectors. This gives the driver a field of vision of 120 degrees. Three LCD displays are used to simulate rear-view mirrors. Both a passenger car compartment and a truck cab can be fitted. Sim III has a vibration table that provides high-frequency reproduction of road unevenness and moves the compartment/cab relative to the projected image. Sim III is therefore suitable among other things in experiments with rumble strips. 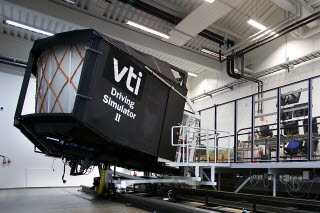 Sim II has a visual system consisting of six SXRD projectors that give a 120-degree forward field of vision. Each projector has a resolution of 1 920 x 1 080 pixels, which gives the simulator very high visual acuity. The images are warped and blended together with help of a software solution for automatic calibration. Rear-view mirrors are simulated with two LCD displays.

Sim II uses a similar motion algorithm to Sim III. The simulator has a vibration table and a motion system that can provide both linear and tilt motion.

The vibration table allows road unevenness to be simulated at higher frequencies and the tilt motion is used among other things to simulate the long accelerations that occur when driving through bends and longitudinal acceleration or braking. Since the simulator's tilt motion affects both the compartment/cab and the projection screen while the vibration table only affects the compartment/cab in relation to the screen, it is possible to create a realistic road feel, among other things in experiments with rumble strips.

The same technique as in VTI:s driving simulators can be applied in the rail area. VTI has developed a rail simulator that can simulate a train driver's work environment. The simulator can be built as a complex solution with a cabin as well as desktop or lap-top installations, depending on the planned usage.

The visual system consist of three 40 inch NEC M40-AV TFT with 1 920 x 1 200 pixel resolution, providing a 180º FOV. The resolution can be set to smaller sizes to adapt to different graphic card capacity.

The motion platform is a 2 dof system which provide tilting motion laterally and longitudinally. Maximal tilting angle is ±6º, which corresponds to a sideways lifting of ±11 cm. Force feedback and vibrations on the steering wheel are present.

The simulator runs on a single Win XP PC, software control of the motion platform is via dedicated drivers for the motion controller card, connected via a single USB cable.